Since Makinom is an editor extension for Unity, this documentation assumes that you’ll know the basics of Unity. If you’re looking for tutorials and learning materials on Unity, head over to their website.

Importing Makinom into your Unity project works like importing any other asset. Depending on the used Unity version, you can import it from the Asset Store window or the Unity Package Manager.

If you’ve got Makinom as a unitypackage file or want to import an extension or plugin for Makinom (e.g. a new UI module) from a unitypackage file, just drag the file into your Unity window and drop it over the Project tab to start the import process. 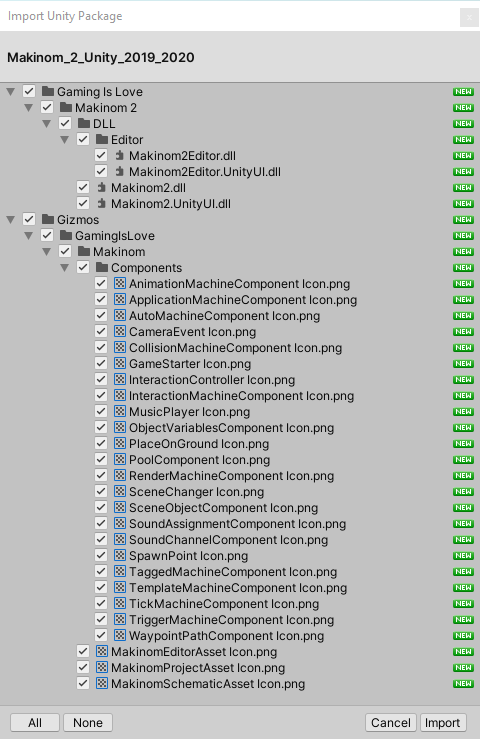 Makinom comes with the Unity UI module as part of the standard import.

If you don’t want to use it you can skip importing it by disabling the UI module DLL files in the import window:

Once imported, you can open the Makinom editor via Unity’s menu: Window > Makinom 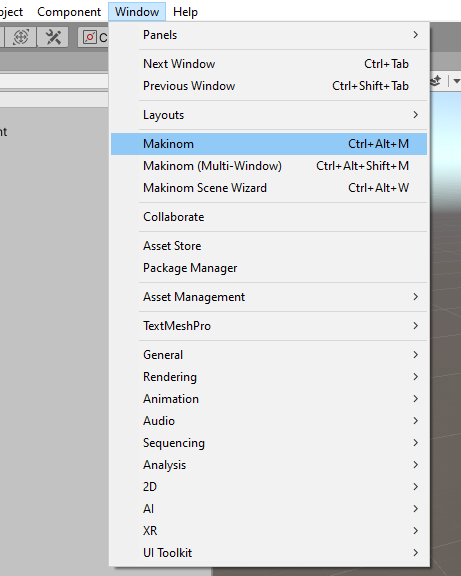 This can be useful if you want to compare settings side-by-side or open multiple schematics.

Alternatively, you can also open the Makinom editor via keyboard shortcuts (displayed beside the Unity menu items). The shortcuts will depending on the operating system you’re working on, e.g. in Windows you can open Makinom via Ctr + Alt + M and Ctrl + Alt + Shift + M (for multi-window use). 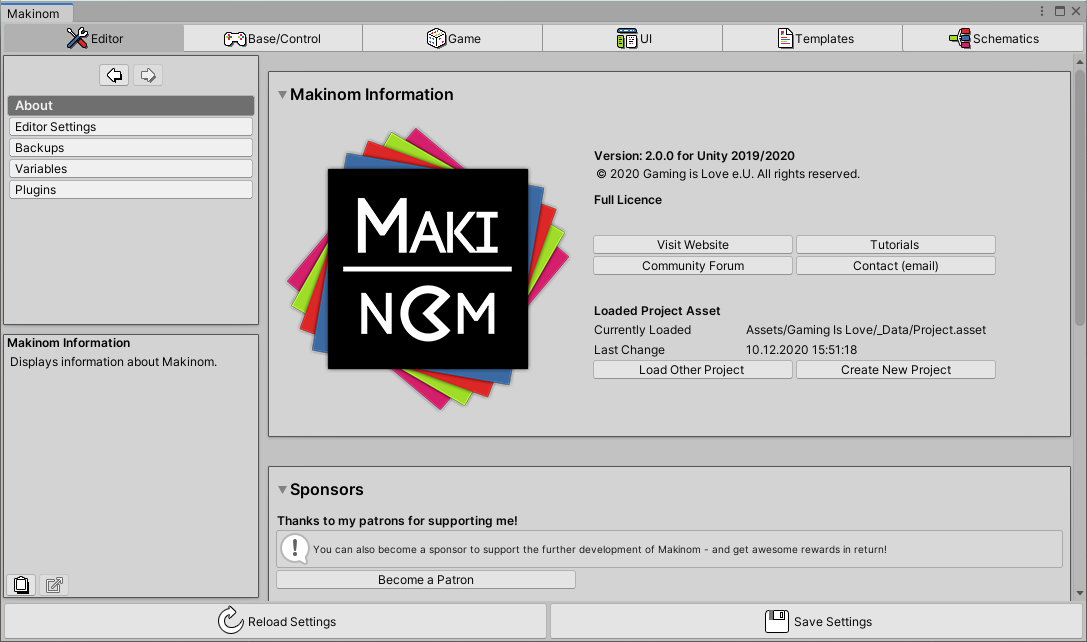 The first time you open the Makinom editor in a Unity project will automatically create 2 assets in Makinom’s data folder: Assets/Gaming Is Love/_Data/

The project asset will remain blank/empty until you save in the Makinom editor (which will also save additional data assets).

One of the first things you should do after importing Makinom is selecting the UI system you want to use. While Makinom comes with the Unity UI module, it doesn’t have it selected in a new project.

Go to UI > UI System in the editor and select the UI module you want to use in the UI System Type setting.

Changing the UI system will prompt a confirmation dialogue:

Using a different UI system will cause UI related settings to change, discarding previous setup. This is mainly the case in UI boxes and HUDs, where part of their setup depends on the used UI system, but can also impact the setup of UI related schematic nodes.

The first time saving will create additional assets in sub-folders of Assets/Gaming Is Love/_Data/.

The individual settings of list content (e.g. input keys or UI boxes) are saved in their individual data assets. E.g. each input key will have it’s own data asset in the Input Key sub-folder.

To save the settings, click on the Save Settings button in the bottom right of the Makinom editor window. This’ll show you the changes that will be saved and offer some additional options (more on them below). 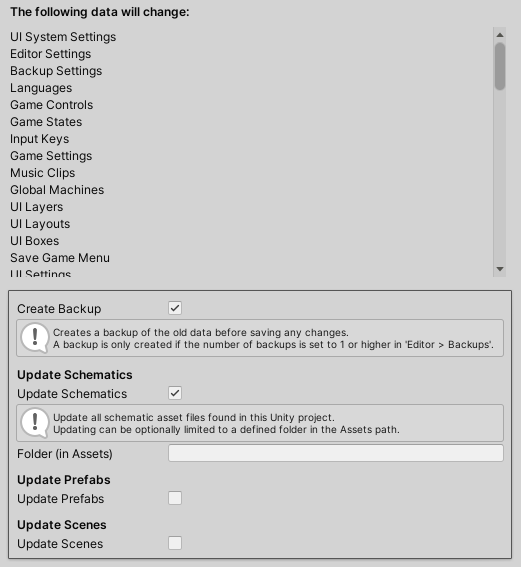 Since it’s the first save, it’ll show a long list, since everything is new.

Learn more about saving settings in the Makinom editor documentation.

Makinom’s scene wizard is a small window to help you add Makinom game objects or components to your scenes.

You can open the scene wizard via a keyboard shortcut, e.g. in Windows: Ctrl + Alt + W 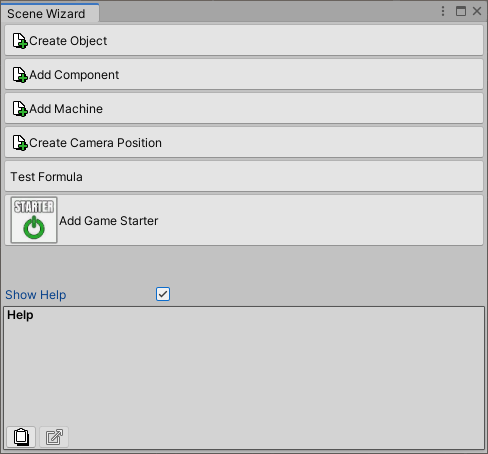 The scene wizard can also display help texts from Makinom settings you hover over. E.g. help texts from inspectors can be displayed that way without having the Makinom editor opened.

The extension manager can be used to browse, download and import available extensions (e.g. plugins, custom nodes, other scripts or schematics) for Makinom. 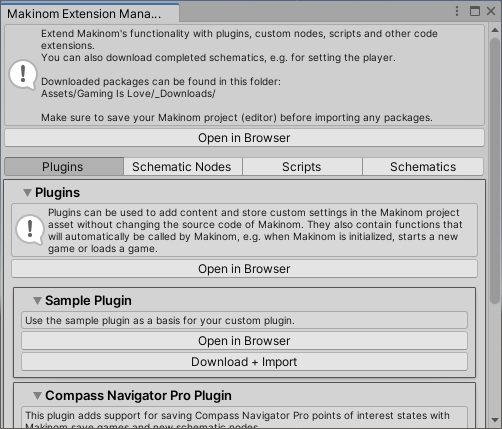 Make sure to save your open Makinom project or schematics (in the Makinom editor) before importing any package, as importing a package will reset all unsaved changes.

To use Makinom in your running game, you need to initialize it before being able to access any functionality (e.g. a machine running a schematic).

Initializing Makinom in your scene is done using a Game Starter component, which selects the Makinom project asset that should be used.

You can have a game starter in each of your scenes to be able to hit play in the Unity editor right there, once Makinom is initialized, other game starters will not be used.

You’re probably eager to try out Makinom – but where to start?

The best place to start is reading the basic documentations on schematics and machines to learn about the core concept of the workflow. You might also want to look into the Makinom editor to get an overview of the available features and where to find the functionality you’re looking for, as well as the node editor (which you’ll use most of the time).

Once you’ve grasped the basics, or just skipped all that reading (learning by doing is also a good way to start), you can start with the easiest tutorial series and create a small Breakout game.

A bit more complex, but also for beginners is the Space Shooter tutorial.

If you’re looking for something more challenging, try the Match 3 tutorial. It contains advanced mechanics with in-schematic machine starting and selected data.