Learn more about how Makinom 2 manages multiple languages and exporting/importing content for translations.

Localization is a crucial and often complex part of game development – that’s why Makinom 2 tries to make it as easy as possible for you!

You can create new languages in Game > Languages in the Makinom editor. Languages can be added whenever you need them, i.e. you can start development with just a single language and add further languages once you start translating your content. 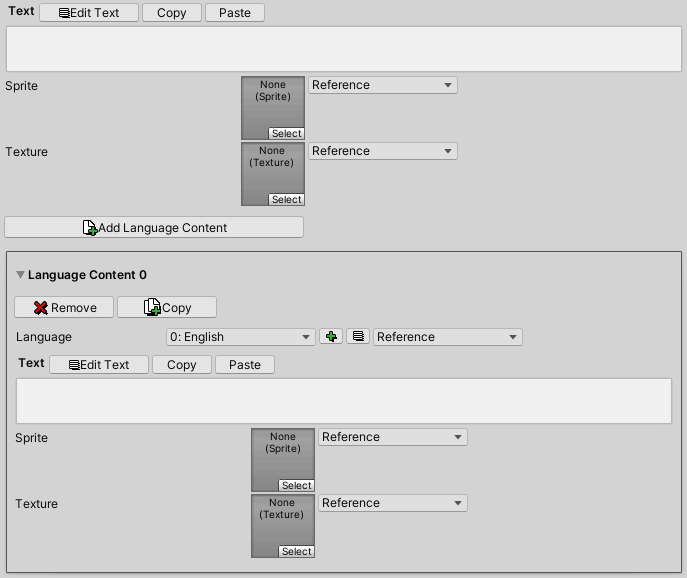 Each content definition has options to include it in language export/import. Content will be exported by default, in case something doesn’t need to be translated, disable Use Language Export in the content’s settings.

You can also include a note for the translator, e.g. if you need to provide some context or clarifications.

You can export and import all your language content texts in Game > Languages. The export/import system is modular and can support multiple formats.

You can create custom export formats by deriving your class from the BaseLanguageExportFormat (namespace GamingIsLove.Makinom.Editor).

The format options will be used for both exports and imports, i.e. when importing, make sure that the options match the importing file.

The exported data can optionally include information about where the text is coming from (Include Information setting) and the translation notes defined in the language contents (Include Translation Note setting). Both settings are enabled by default. If your import file no longer contains the information or translation notes, make sure to disable those settings before loading the file.

The default implementation exports/imports in CSV format (UTF-8 encoded) and lets you define the separator (defaults to ;) and optional text enclosers (defaults to “).

You can further process the file with any table calculation program like Excel from Microsoft. When using Excel, make sure to import the CSV-data instead of opening the file directly, as it’ll otherwise not use the UTF-8 enconding and can lead to reading certain special characters wrong.

After processing and converting the file back to a CSV file (UTF-8 encoded), make sure to still include the Export ID and Index columns.

Exporting language content is separated into four different parts. Each part will create a separate file in the selected format.

Each language content that’s exported will receive an export ID, i.e. it’ll also cause changes and requires saving the changes. Depending on the exported part, some things will be saved automatically, but you’ll need to save in the Makinom editor in any case to keep track of the last export ID.

To create a fresh export and assign new export IDs, enable Reset Export IDs in the export settings. Please note that this’ll make any previous export invalid, as export IDs might no longer match. Without export IDs, the content might be assigned to the wrong settings (or not at all) when importing again.

The settings export contains all language content that’s defined in the settings you made in the Makinom editor (excluding schematics).

You need to save the settings in the Makinom editor to keep the export IDs.

The scenes export contains all language content that’s defined on game objects (via components) in your scenes. This only includes scenes that are added to Unity’s build settings.

The export IDs will be saved automatically with each scene, but you still need to save in the Makinom editor to keep track of the last export ID.

The prefabs export contains all language content that’s defined on prefabs (via components) in your project.

The prefabs will be saved in case they contain language content that’ll be exported, as they need to keep their export IDs, but you still need to save in the Makinom editor to keep track of the last export ID.

The schematics export contains all language content that’s defined in schematics in your project. You can optionally limit the schematics to only include a defined folder (and sub-folders).

The schematics will be saved in case they contain language content that’ll be exported, as they need to keep their export IDs, but you still need to save in the Makinom editor to keep track of the last export ID.

To import a file, you first need to select a file and load the file’s content via the Load Exported File button. 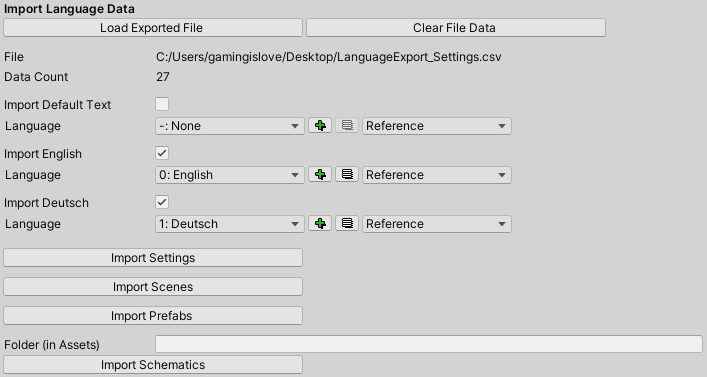 Once the file is loaded successfully, you’ll see more information about the file’s content, including the number of separate language contents it includes. You can also select which language will be imported.

Like exporting, importing is also separated into the four different parts as explained before. After loading the file, you’ll have the 4 import buttons available – make sure to use the correct button for the file you’re importing, as they’ll most likely share export IDs (each of the four export files will start with export IDs at 0).

To do this, navigate to Editor > Editor Settings and click on the Export Default Help button. This will export all help texts (default english texts) as a CSV file (UTF-8 formatted).

The translated CSV has to keep the same structure, i.e.:

Please note that the help texts are found based on the identification, which relies on the class/field the setting is in. When something changes in an update (e.g. a class or field being renamed), the translated help texts can no longer be found and you’ll have to retranslate the default texts.

You can use Google docs to quickly translate CSV files.